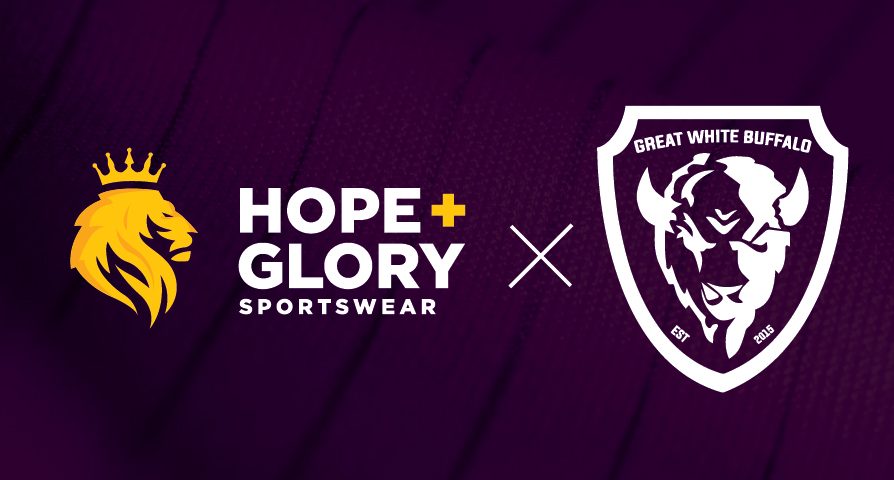 Hope & Glory Sportswear are delighted to announce a partnership with American side Great White Buffalo.

The deal will see the Hope & Glory supply a bespoke away kit & fans replicas designed by The Kit Factor.

GWB will hopefully be the first of many American teams to don the apparel of H&G in the coming months.

For those unaware of Great White Buffalo, they are located in Buffalo, New York, USA and play in the Buffalo District Soccer League (BDSL), a league which comprises of 90 teams across six divisions. GWB was officially formed in the winter of 2015.
In 2017, the club changed team management and the evolution began.  A new crest was designed and a roster overhaul that focused on commitment of the players for the entire season.  GWB finished the season at 7-2-2 with a goal diff of +21 and made the playoffs as a 4th seed.  They ended the season on a strong run with 3 straight clean sheets including the semi-finals (3-0) and the finals (2-0) and were crowned Division 3 Champions!  Additionally one of their captains, was the overall BDSL league Golden Boot winner tailing 17 goals in 14 games!

In 2018, the team was promoted to the second division where it would face a new level of weekly competition. They finished league play 6-2-3 with a GD of +6 and just sneaked into the playoffs by one goal!  They unfortunately bowed out of the playoffs after one game.  However, their main success was their run in the Wood Cup after drawing a ‘play-in’ game.  They endured a 6 match cup run, that even had two game wins decided by PKs.  They were eventually crowned Wood Cup Champions of 2018 when they won a very close final match 1-0.  Ending a second season with a trophy!

In 2019 the club planned to defend their Wood Cup, while making a run at a double with the Division 2 title as the ultimate goal.  Their lofty goals did not come to fruition, but they did have a good run with ending their regular season in first in their conference with a record of 8-2-1, with a goal diff of +20 and allowing only 6 goals! They lost in the semi-finals to the eventual champs, but played a hard fought promotion game, and won 2-1 in the dying minutes to secure promotion into Division 1 in 2020!

Their weekly stout defensive and goalie play, GWB only allowed 7 goals, and had 9 clean sheets across their 13 game campaign! Finally in 2019 they chose to support a Buffalo based international charity, Bunkers for Baghdad where they raised over $300 and 500 golf balls to donate to troops serving aboard. ”

The new GWB away shirt and away goalkeeper shirt will be revealed in the coming days and available for pre-order shortly after.